Julius Evola and the UR Group – Introduction to Magic: Volume 1 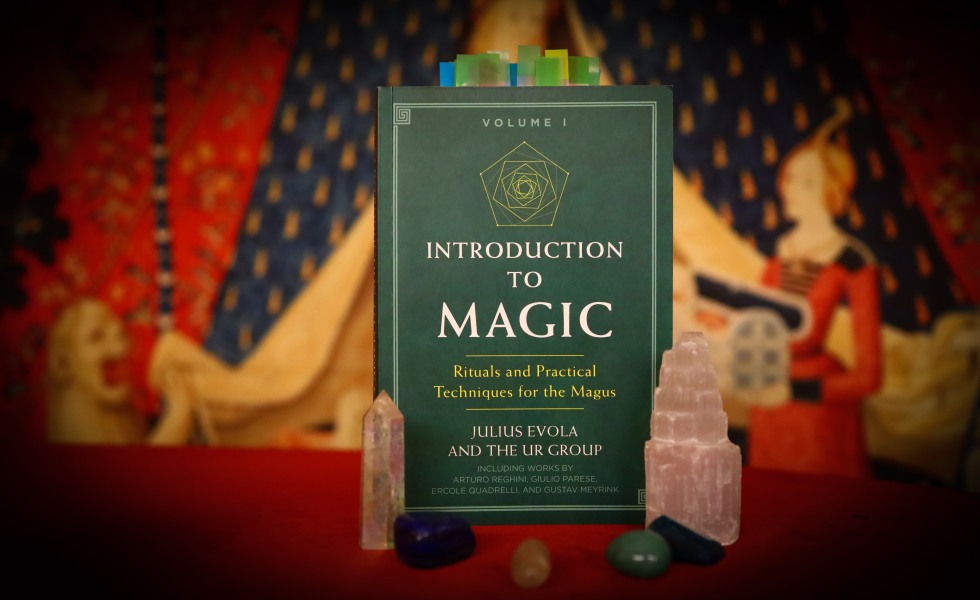 I have read Introduction to Magic: Volume 1 – Rituals and Practical Techniques for the Magus by Julius Evola and his companions of the UR Group – in Italian: Gruppo di UR. The Baron needs no introduction; the UR Group, however, may be unfamiliar to some (see below).
Volume 1 of Introduction to Magic is more practically oriented that Volume 2 and 3 (which will be the subject of a coming book review), and can be read on its own.
Reading all three volumes will be quite time-consuming, especially since the material is rather heavy. Therefore, it might be good to read the first volume for its practical advice and leave the second and third volumes for a later time.
Again, the essays make for some quite heavy reading, so if you are not used to this type of literature, it may be a better idea to start with a book such as Icelandic Magic (read my book review here: Icelandic Magic by Stephen E. Flowers).

Below are some insights from the first volume I thought would be interesting to share.

In Swedish, the word ‘ur‘ is a prefix that basically means primordial or ancient. If I were to translate The Primordial Beast into Swedish, it would be something like Urbesten. Ur + besten (besten = the beast). Except for Evola himself, the group consisted of individuals who wrote under pseudonyms – such as Abraxas*, Luce, and Arvo (among others). The essays were mainly written during the turbulent Interwar period. The material the group presented dealt with magic (religious practices, rituals, meditation, and metaphysics etc.). I will write more about their influence in Italian society in the next book review.

Mithraic Ritual of the Great Magical Papyrus of Paris

One of the most interesting essays in the volume is about the Great Magical Papyrus of Paris. For those who have read Dauntless, the Cult of Mithras will be familiar. For an introduction to the cult, you can watch Survive the Jive’s video: The Military Cult of Mithras – Very Indo-European.
The papyrus describes and gives instructions for a magical ritual. The ritual contains both breathing techniques and bodily postures – the UR Group points out that this confirms that these matters are not limited to Hindu Yoga. The same is true for the use of ‘names of power’, which correspond to mantras of Hindu tradition.
In Dauntless, I introduce my own two favourite Pranayama techniques; Bhastrika (Bellows Breath) and Nadi Shodana (Alternate Nostril Breathing) – these are taken from India.

Come summer, I will experiment with the instructions in the papyrus. It is winter as I write this, and since one of the instructions is to ‘breathe from the solar rays, inhaling three times as deeply as you can,’ it is more reasonable when Sol Invictus returns to the fair lands of Moder Svea.

The text as it appears in the volume is translated into English from Italian (and from the original Greek into Italian). As with many ancient texts, much will inevitable become lost in translation – even so, it contains many epic passages. I am always on the lookout for such epic passages that I can memorise and meditate upon, and thereafter draw strength from.

‘Be favourable to me, O Providence and Fortune, as I write these first mysteries to be transmitted to the only Son, who will be rendered immortal, to the Initiate worthy of this Power of ours. The great Sun God Mithras ordered me to transmit these mysteries through his own Archangel. Be favourable to me, so that I alone, the Eagle, may reach the Heavens and contemplate all things.’

‘Having said this, the solar rays will converge on you. You will become their center. When this is fulfilled in you, you will see a young handsome God, with fiery hair, wearing a white tunic and a scarlet mantle, with a fiery crown on his head. Greet him straightaway with the greeting of Fire’

‘The earth will shudder and a God will descend, an immense, radiant presence. He is young, with golden hair, wearing a white tunic, a golden crown, and a long robe.’

The passages above are within a context too long to elaborate on here, but I wanted to share them so you can get a feel for the text. Getting a feel is often more useful and powerful than the intellectual insight itself – this is especially true when we are talking about magic and mental techniques. The second and third passages above reminded me of the God that appears in Lucifer’s Court – you can read my review of it here: Lucifer’s Court – Book Review and Inspiring Quotes. A good esoteric book should contain passages about such Gods!

Knowledge of the Waters

In this essay by Abraxas, a primordial force is discussed. It can be introduced in the following manner:

‘The Wise spoke of it as a wonder and as a terror. They called it: Universal and Living Fire, ύλη (matter), Green Dragon, Quintessence, First Substance, Great Magical Agent. The principle of their “GREAT WORK”, since the Magistery of Creation and the Magistery with which man realizes himself according to the Royal Arts are one and the same.
This Matter of ours is neither an abstraction of profane philosophy nor a myth or a fairy tale, but a living and powerful reality, the spirit and the vitality of the Earth and of Life.’

Abraxas – Knowledge of the Waters

Later in the essay Abraxas likens the harnessing of this power to a strong man grasping a bull by the horns to subjugate it, thus enabling him to dominate its cosmic nature in himself. This is similar to what I mention in Dauntless in regard to sexual energy – instead of wasting it on unfruitful endeavours, it can be harnessed and used for your ascent to greater heights of being.
The energy described in the quote above can be found within you – an Esoteric Master who seeks to increase his power and leverage in the world wants to find said energy and use it as fuel for his quest. This will not make much sense to most people, but since you are reading this, you are not most people and will thus have a different appreciation for this insight.

This energy is part of a greater energy, your being is part of something greater – like a branch is just a part of a tree. Abraxas notes that this is similar to the Buddhist conception of ‘sâmsaric consciousness.’

Instructions for the Awareness of Breath

Another passage by Abraxas discusses a meditation technique. I tried this technique during a meditation and found it quite useful. It is actually quite similar to something Wim Hof says: ‘with your mind, follow your breath.’

The technique can be summarised as follows:
1. Lie down horizontally, completely relaxed.
2. Abandon the body.
3. Evoke the image of air: free, without bonds, infinite, fleeting.
4. Slowly reawaken the breath without ‘touching’ the body – using the mind to draw breath as opposed to a movement of the muscles.
5. Envision your consciousness as the air. Instead of feeling the lungs moving the air, feel the air moving the lungs.

When I meditate, I either sit down cross-legged on a meditation pillow, or I lie down on my shaktimat (seen below).

The Problem of Immortality

An interesting essay in the volume is The Problem of Immortality. It is signed as Ea, but it is clear that it is Evola who has written it (one can tell from the style and sentiment). A particularly insightful passage is the following:

‘The idea that everybody possesses an “immortal soul,” conceived moreover as a facsimile of his living consciousness and individual earthly Self, is a true

ideological aberration, although its usefulness as opium for the masses at

Evola’s anti-egalitarian views are refreshing – and gives credibility to his teachings. This is especially true since many ‘spiritually’ oriented persons subscribe to false ideas such as the equality of humans. Anyone with a modicum of experience and reason can clearly see that humans differ greatly in their quality and value. Treating humans and animals with dignity is always a good idea though.

At 376 pages the volume contains many more valuable insights than shared in this review. As already mentioned, the book is quite heavy to read so I would not necessarily recommend it to anyone who is unused to reading material like this. However, if you are interested in these matters, I would highly recommend it.

Lastly, if you have not already done so, I highly recommend you to listen to Podcast Episode 11. Demigod Mentality (which deals with magic and mentality).

← Spirits of the Past – Legio Gloria January 2022 Release
Julius Evola and the UR Group – Introduction to Magic: Volume II & III →