Human, All Too Human by Friedrich Nietzsche 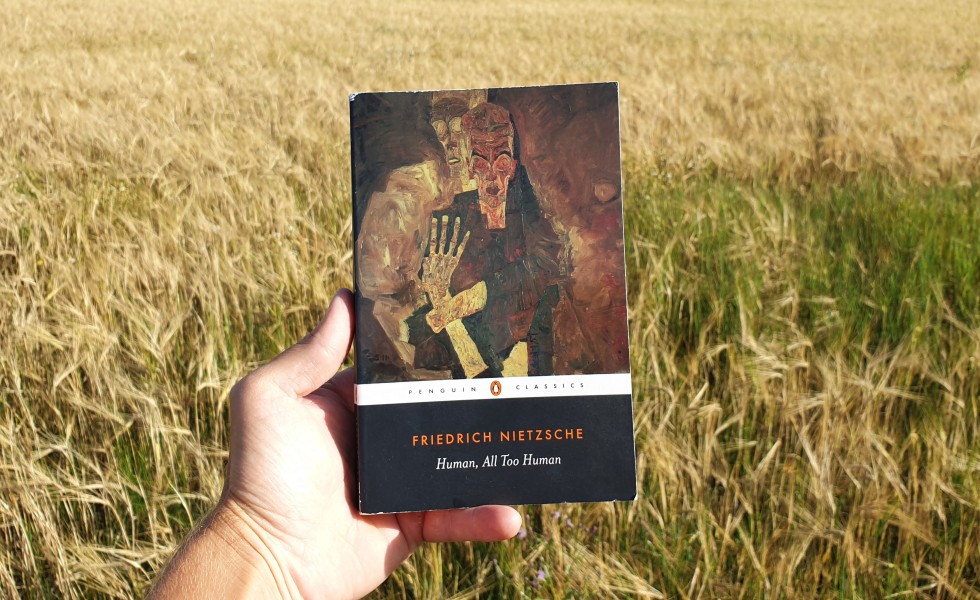 At long last, I decided to read Nietzsche’s Human, All Too Human. I bought the title in a bookshop in Galway a lifetime ago (nine years!), since then it has patiently waited for me to partake of its wisdom.

Since this is the only Nietzsche book I have read thus far, I will content myself with sharing my first impressions. I will elaborate more generally on his teachings later on when I have read a few more of his works. Perhaps Human, All Too Human was not the best starting point for Nietzsche’s teachings, but it had to serve as my starting point nonetheless.

To summarise my first impressions, I must regrettably say that I did not find it all too inspiring or insightful. Perhaps I have been spoiled by reading so many interesting works by Evola and Flowers (and, recently, Eliade).

The book is quite dense (in the sense that it takes a lot of concentration to digest what he writes). This is true for many of Evola’s works as well. Yukio Mishima’s Sun and Steel (review) also presents the same challenge. The difference, however, is that reading Evola makes me want to create an esoteric knightly order of European gentlemen. When I read Sun and Steel, I wanted to train in the sun. Human, All Too Human did not evoke any similar high-thumos sensations.

The book consists of 638 maxims (some shorter, some longer), which mainly concern human behaviour. The observations are quite cynical and not overly profound.

Nietzsche’s anti-Christian sentiments are well known. He is not only anti-Christian, however; he is also anti religion and presents metaphysics in the same way one imagines a smug atheist would. In my humble opinion, we need more metaphysics, not less. Nietzsche was, of course, a product of his own time and upbringing. His father was a Lutheran pastor – it is interesting how many anti-Christian individuals come from religious households. In regard to metaphysics, he states the following (such a world = the metaphysical world):

The sentiment above is not one that is congruent with the mentality of one who seeks to ‘conquer the world through his power’ – a reference to a quote that Evola shares from Tantrattva 1:27 in his The Yoga of Power (review). Instead of this unheroic view of metaphysics, it is better to fully embrace the spiritual paths of our Indo-European ancestors – which Stephen E. Flowers shares with us in his works – in The Nine Doors of Midgard (review), for example.

Nietzsche shares the following sentiment about Christianity in the chapter titled Religious Life:

‘Christianity wants to destroy, shatter, stun, intoxicate: there is only one thing it does not want: moderation, and for this reason, it is in its deepest meaning barbaric, Asiatic, ignoble, un-Greek.’

We will encounter a more profound critique of Christianity in other works by Nietzsche (some trusted friends have recommended a few titles to me) – this critique is especially interesting as it pertains to his teachings on Slave Morality and Master Morality. He critiques Christianity in other maxims as well; none of the maxims provide a deeper analysis, however.

In maxim 150 (page 105), Nietzsche states that ‘Art raises its head where religions decline.‘ This is clearly not the case. One simply has to look at the great cathedrals to see how faith can inspire beauty. Great art comes from passion, not reason. One can also turn the gaze to India to behold the beauty that profound metaphysics can generate. One could even argue that a lack of solid metaphysical underpinnings in a society gives rise to soulless architecture (i.e. modern architecture).

Luther, the Emperor, and the Pope

Since we have encountered the conflict between the Holy Roman Emperor and the Pope before in Evola’s works, I thought it would be a good idea to share the following interesting insight by Nietzsche:

‘The fact that Luther survived at the time, and that his protest gathered strength, lay in the coincidence of an extraordinary political configuration: the Emperor protected him in order to use his innovation to apply pressure against the Pope, and likewise the Pope secretly favoured him, in order to use the imperial Protestant princes as a counterweight against the Emperor.’

Discussions about Luther are always interesting since the repercussions of his work had such an impact on the trajectory of European civilisation. I have elaborated on Luther before, but to briefly summarise: I regret the division the Protestant Reformation caused, but he was also correct and courageous for confronting the corruption of the Catholic Church. In that sense, he was a brave man that I can admire.

In maxim 262 (page 161), Nietzsche notes the following regarding the great Homer:

‘Even now, the greatest fact about Greek culture is that Homer became Panhellenic so soon. All the spiritual and human freedom the Greeks attained goes back to this fact. But at the same time it was also the actual doom of Greek culture, for, by centralizing, Homer made shallow and dissolved the more serious instincts of independence.’

In my humble opinion, it was great that Homer’s work became Panhellenic. Panhellenic sentiments allowed Greece to stave of the Persians. The influence of Homer also fuelled Alexander’s quest for godhood, glory, and conquest. I also welcome the influence Homer has had (and continues to have) on European civilisation.

Can I Recommend the Book?

At 267 dense pages, Human, All Too Human is not a light read (especially since many passages may require re-reading) nor is it particularly interesting. As mentioned above, Evola is not light reading either, but his teachings are interesting and inspiring enough to make the reading worth it. In a recent video, I mentioned that Evola’s Ride the Tiger is perhaps his most uninteresting book (and definitely not one to start with), and I do not judge Evola solely based on that book. Therefore, I will not judge Nietzsche solely on this book either.

Moreover, since I have now read one book by Mircae Eliade and one book by Friedrich Nietzsche, a brief comparison is in order – Eliade’s The Myth of the Eternal Return (review) at 162 pages contains a great many more interesting insights than Human, All Too Human does at 267 pages.

I would not recommend Human, All Too Human unless you are a Nietzsche connoisseur – especially considering the number of interesting books that I have read and reviewed as of late.