The Practical Art of Divine Magic by Patrick Dunn 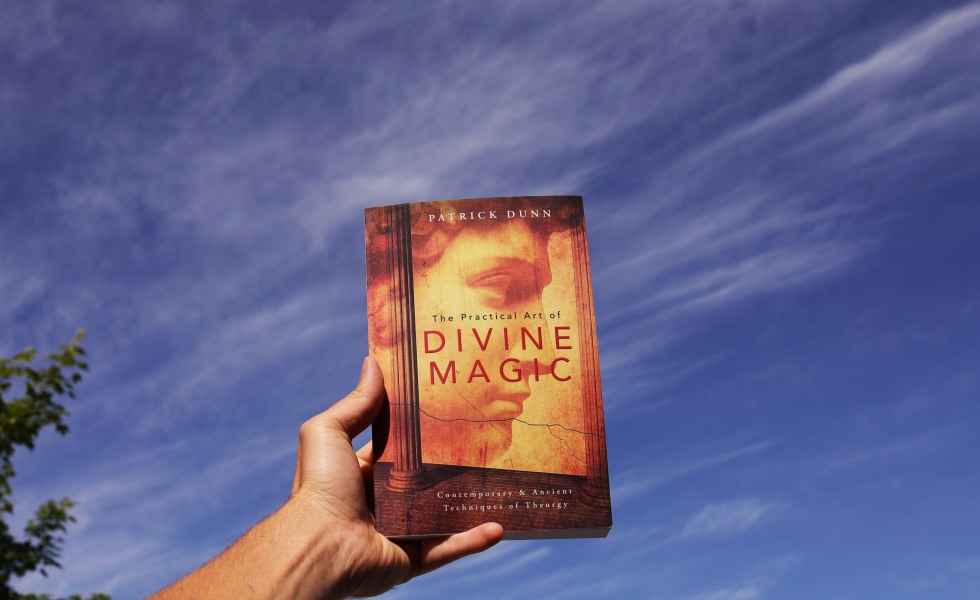 I have read The Practical Art of Divine Magic by Patrick Dunn per the recommendation of a trusted friend. It turned out to be a solid recommendation. The author discusses various, sometimes complicated, concepts and explains them in a very accessible way – making the book a good introduction to the metaphysics of antiquity. Since we have encountered Neoplatonic teachings in so many other books, reading this book was a natural next step. The book also contains some meditation techniques, as well as (like the title of the book suggests) practical instructions for worship of the Gods – in the author’s case, the Graeco-Roman Gods.

Neoplatonism is a term to denote the philosophers during Late Antiquity – the later years of the Roman Empire – who derived their metaphysical views from Plato (hence the name). A spiritual goal of the Neoplatonists was henosis – a sense of unity with the divine. Thus, they can be said to have belonged to the Right-Hand Path of magic that we encountered in our review of Lords of the Left-Hand Path by Stephen E. Flowers.

Theurgy basically means ‘god-working’ and is the practice of magic that looks upwards with the aim of unifying the human mind with the divine. One’s will is sent upward. An interesting quote shows the Platonic influence on Christianity.

‘The rise of Christianity did not kill theurgy; in fact, in many ways it invigorated it. Theurgic practices adapted well to the theology of Christianity and were sometimes incorporated wholesale. The gods became angels, the One became God, and the logos became Jesus. When the gospel of John begins “In the beginning was the Word, and the Word was with God, and the Word was God,” the Greek for “word” is logos. We could do a Neoplatonic translation of this just as easily, without having to modify the original Koine text at all: “In the beginning was the rational basis of the universe, and the rational basis of the universe was with the One, and it was also the One.”’

The author also notes that later Christian Neoplatonists such as John Dee and Henry Agrippa (whom we have encountered before) among others contributed with their philosophies to the practice of magic.

The author shares an insightful quote by Plotinus, a chief proponent of Neoplatonism:

‘IV. 3, 11. The olden sages, in seeking to procure the presence of the Gods by erecting temples and statues, seem to me to have possessed deep insight into the nature of the universe: They felt the All-Soul to be a Principle ever at our call; it is but fitly preparing a place in which some phase of it may be received, and a thing is always fit to receive the operation of the Soul when it is brought to the condition of a mirror, apt to catch the image.’

Plotinus – The Ethical Treatises, being the Treatises of the First Ennead

The author notes that a statue is a site of contemplation of the One, through the intermediaries of the Gods. This is a good insight and a reasonable view of holy sites. We encountered another interesting view of statues in The Agni and The Ecstasy by Steven J. Rosen (read our review here). Pictured below, yours truly in San Ildefonso, Spain – a sacred place with beautiful statues galore!

Aristotle, Plato, and the Soul

I am not yet wise enough to give a definitive statement on the nature of the soul (one day I will!), but I thought the following passage would be interesting and relevant to share:

‘That the soul is a single thing, indivisible, comes from Aristotle, and this notion was a new one. Aristotle defined the soul as that first cause of thing, its purpose of being. The soul of a clock is to tell time. The soul of a dog is to be a dog. But the soul, for Aristotle, was merely the cause of the body; without the body, there was no soul, or need for one. Aristotle was responding to Platonism, which argues that not only is there a soul, it is the intermediary between the human consciousness and the world of Ideas, or Nous.’

The author goes on to describe Plato’s tripartite division of the soul: the driver (the rational part), and the two horses (Eros and Thymos) – which I elaborated on briefly in a video (Lose Fat With Plato – Mental Technique to Resist Cravings).

The Corpus Hermeticum that we encountered in our review of Evola’s The Hermetic Tradition (review here) is referenced in this book as well. Just as the teachings of the Neoplatonists are reoccurring in spiritual books, so is the wisdom of the Corpus Hermeticum. The quote below concerns astrology – a topic we will return to in coming book-reviews (or videos or Podcast episodes).

‘Each of us at birth, when we receive a soul, are taken under the wings of the daimones who are assigned that sign of birth, who govern each of the stars… So they, plunging into the two parts of the soul through the body, twist each to their particular energy; but the rational portion of the soul stands, unruled by the daimones, ready to welcome the divine.’

We will encounter and elaborate on daimones again, but what we can say for now is that the daimon (which is not evil but not always benevolent) should not be confused with the (evil) demon of Christianity.

In a passage concerning festivals, the author describes the Olympic Games in the following beautiful manner:

‘The games themselves were a tribute to Zeus, showcasing the most perfect and beautiful achievements capable of the human body. But not only physical achievement was displayed: artistic and poetic talent also had their competitions. The festival was an offering of human beauty to the gods.’

Keeping this in mind, one could argue that seeking physical perfection is an act of piety. Moreover, although the following quote is not from the book that is the subject of this review, it is highly fitting to include nonetheless:

‘/…/ Polynikes’ supreme physical beauty. In every aspect of his person, face as well as physique, the Knight was formed as flawlessly as a god. Naked in the Gymnasion, even alongside scores of youths and warriors blessed in comeliness and elevated by their training to the peak of condition, Polynikes stood out, without equal, surpassing all others in symmetry of form and faultlessness of physical structure. Clothed in white robes for the Assembly, he shone like Adonis. And armed for war, with the bronze of his shield burnished, his scarlet cloak across his shoulders and the horsehair-crested helmet of a Knight pushed back upon his brow, he shone forth, peerless as Achilles.’

At 314 pages and written in an easily digested manner (as opposed to some other esoteric books one might encounter), The Practical Art of Divine Magic can be read within a reasonable time-frame. The book contains several more interesting insights in addition to the ones presented above. As stated in the introduction, it was a good recommendation by a trusted friend that I can now recommend to others.

← Lords of the Left-Hand Path by Stephen E. Flowers
The One-eyed God and the (Indo)-Germanic Männerbünde by Kris Kershaw →