Pumping up the Gunz, an important part of a photoshoot!

First of all I have ‘completed’ the Russian Squat Routine. Which is to say that I made a bold dash to take my goal of 210 kg before the schedule ended, the reason for this was so that I can focus a bit more on getting in shape one last time for my last shoot. And then after that is done do another round of the RSR (this time calculated on 210 kg instead of 200 kg). In the meantime I will begin the Swedish Deadlift Routine, which is the same as the RSR but you calculate in on 10 kg higher than your 1RM, I will follow this schedule until the middle of September when the bulk begins (then I will find a way to incorporate deadlifts in my RSR, more on that later). The biggest challenge here is probably the grip, which I hope to strengthen. The video of the 210 squat will be out tomorrow. I also performed the first session of the Swedish Deadlift Routine today (which I will also post as a video), it consisted of 6 set a 2 reps on 200 kg.
As for the diet I had a photoshoot yesterday, photos from that are coming up, I tried to get a bigger look this time so I loaded with large amounts of carbs the day before and quite a bit of regular pre-shoot nutrition before the shoot itself (yoghurt cashews).
Other thoughts regarding the diet is that Edamame Beans are really delicious, my latest Gains Kitchen shows how to cook them, really easy to be honest, just let them seethe with some salt for a good five minutes and you are ready to go!
Also, some good news, I am back in my apartment with my glorious Internet and I have a new camera so now it is only a proper telephone that is needed (mainly for good pictures) and I am all set to begin the grand plan in earnest!
Next week will see some hard work and lots of opportunities to learn new things. I aim to grow my Youtube as much as possible, I will discuss my goals further ahead, alas what I can promise now is that I will work as hard as I can everyday to achieve maximum amounts of glory. If I fail it will not be because I did not give everything! 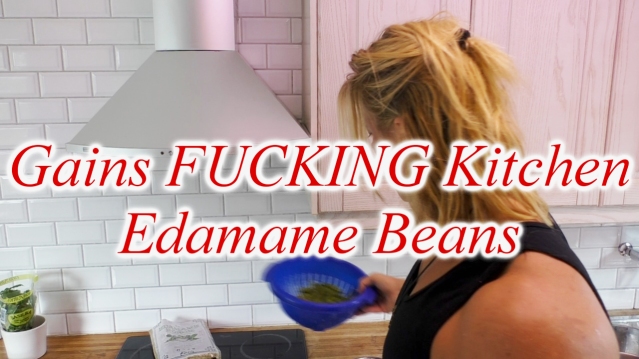