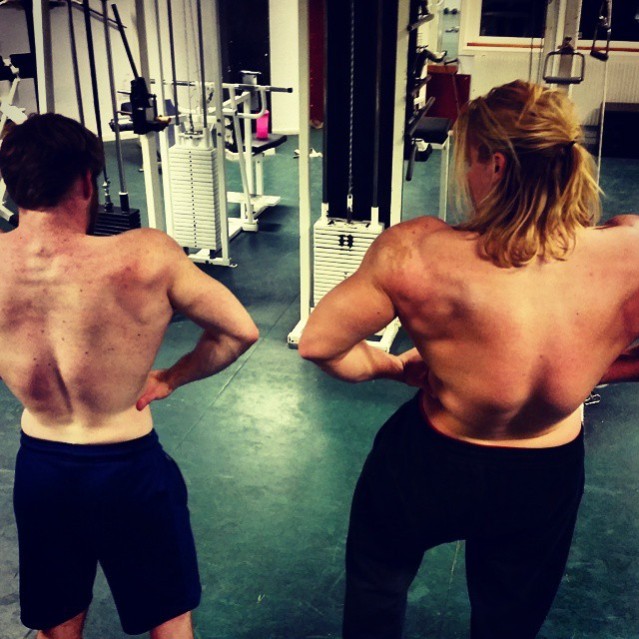 The training of the week has been rather slow and without much intensity, I have mostly been focusing on my new deadlift technique, which by now feels quite solid. I haven’t tried it on any heavier weights yet (max at 170 kg) and I will continue to increase the weight slowly so I don’t loose the form. For those of you who are unaware I have changed my technique in order to incorporate more legs.
In other news I have continued my Smolov JR for the bench.
As for the diet I have begun to drink a https://www.youtube.com/watch?v=KB2gQuC8zwQ everyday for additional general health and energy. It is easy to miss out on the benefits of a solid diet during the bulk if you feel tired of eating so much and don’t get in your greens. I want (and need) to be productive and healthy overall so I want to make sure to keep a well rounded diet, as opposed to only look at getting as much carbohydrates and protein in as possible!
I have also tried some different version of the Gains Kitchen one, I am in this moment drinking one with kale instead of spinach and an apple instead of two kiwis, tastes good!
For those who didn’t see the video the original recipe is:

It is also very convenient to drink this instead of a solid meal!

In other news I just finished Ryse Son of Rome, I just uploaded the second last episode and the last episode will be up tomorrow! A solid game overall, with absolutely stunning graphics and cinematics. Next up for Let’s Play is Total War: Rome II, which I haven’t really made a solid campaign with yet. I was going to make a long campaign with Ptolemaic Egypt but stalled severely and decided to start a new campaign instead. After that (or maybe simultaneously) it is high time to return to Skyrim. My original plan was to save Skyrim until the snow hits the land, for additional feels and cosiness.
I know there are a lot of games that would probably be more beneficial in terms of views but in accord with my aesthetics it is appropriate that I gain some glory in the name of the ancient heroes! I haven’t decided upon a faction to play as yet, although I will probably go with Macedon!

Also, speaking of YouTube videos, which is my main thing now a days (in addition to my studies, I am currently writing my bachelor thesis in economic history for those who wonder). Yesterday I took a shot against leftist and feminists in the Western world today, this was a long time coming and I have received a massive positive response which is really appreciated. I basically say what everyone thinks, if you haven’t seen the video yet it is here: https://www.youtube.com/watch?v=KB2gQuC8zwQ