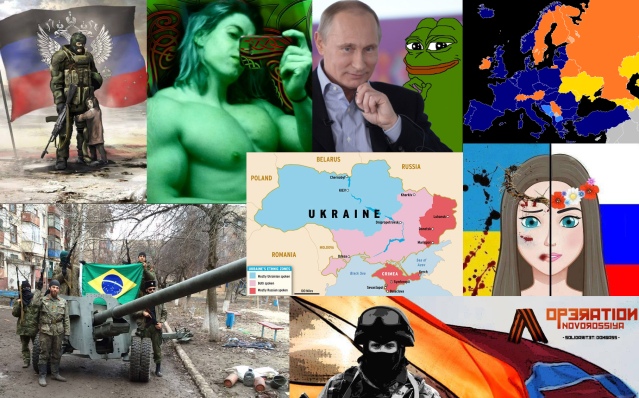 Let us be real regarding the situation in Eastern Ukraine here!
Let us also be a bit controversial and take a brief look at what sparked WWII. Namely a German minority stranded in Poland (due to a shift of land ownership after WWI) being persecuted whilst a large and aggressive mothernation (Germany) looked on as the persecutions continued (up to a certain point).
I am fully aware of that the Germans had committed transgressions against the Poles previously also (there is always two sides to each story).
The situation is quite similar in Ukraine right now, the Russians in Eastern Ukraine are also being persecuted by NATO backed Kiev. I understand fully that the Ukrainians want the Russians out of Ukraine (just as the Poles would want the Germans out of what had become Poland prior to the War).
I think it is a travesty when Europeans are killing each other and I think everyone wishes the bloodshed would end.
However, let us analyse the situation Putin is in right now. He has stranded countrymen just to the West (quite similar to the German predicament prior to the War) being hammered by NATO, which has increased its aggressiveness as of late (just look at the placement of NATO’s bases around the world).
Not only has NATO acted politically aggressive but also economically aggressive with sanctions (which by the way also hurts the economy of European nations).
On a personal level I am obviously looking out for the well being of Finland and Estonia first and foremost and I think neither of those nations are particularly interested in an aggressive Russia. What is important to realise here is that someone can only be kicked for so many times before they kick back. NATO aggression towards Russia does not align with the interest of any European. I am all for the repatriation of Russians in the Baltic states, but that doesn’t mean that I condone of terror bombings over the separatist states of Eastern Ukraine.
What we have to realise is this: Putin is an alpha, the Russians are his people, and his responsibility is to look out for them, simple as that. If his people are being persecuted in a nearby region (which has strong historical ties to Russia to begin with) it is not unreasonable to think that he might wonder if the most honourable thing to do isn’t to rescue them.
What the difference between the separatist states in Eastern Ukraine and the Russian minorities in the Baltic states is that the Russians in (for example) Estonia is a part of the society yet stands outside it (a very bad situation for anyone involved) and the best solution in that case would probably be for those Russians to return to Russia (who with declining birthrates need all the ethnic Russians it can get anyway).
Now with the separatist states it is a completely different matter, their societies are set apart and deeply rooted on another level, the societies are ‘theirs’ so to speak. I am all for the separatists being allowed their freedom and the Russians in the rest of the Ukraine can move there. Now the state of Ukraine obviously has no incentive to give away lands rich in minerals among other things. The question is how far they are willing to go to subjugate the separatists and provoke the anger of Russia (they obviously push harder now that they have NATO in their back).

To conclude. Economic sanctions are hurting European nations. NATO aggression towards Russia is despicable. Putin is not the bad guy here, NATO is, and if NATO keeps pushing it Putin will eventually turn into the bad guy (as he is looking out for his own).