I wanted to share some thoughts regarding the latest releases (available here: Legio Gloria New Releases) since doing so is my custom and since I am happy and proud to present them.

The title of the article is Fulfilling Visions and I named it thus since many of the garments are now visions that have been fulfilled. Setting up a goal and reaching it, small or large, is a great sensation.

The Atlantis Linen Shirt is similar to the Aesthetic Men’s Linen Shirt. After some contemplation some adjustments to the cut were made. The new shirt is more spacious across the chest and less spacious around the waist, making it even more suitable for an athletic physique. The colour is a striped sea blue, and the name of Atlantis is to invoke the sense of a lost civilisation being brought back to life.

Linen is a great material for clothing and has a long history in Europe. Its only downside is that it quickly gets wrinkly. However, since this is common knowledge you can get away with it; no one expects you to have a linen shirt that is not wrinkly after a day of wearing it. That being said you can of course iron it before putting it on.

The linen shirt is made in Lithuania.

The Epona’s Gym Shorts have been in the works for quite some time and this type of shorts have been a personal wish for many years. I remember reading a historical fiction novel set in ancient Greece and the Greeks were said to wear clothing that showed the musculature of the legs, I thought this made sense. Wearing shorts that display your legs will also keep you accountable in regard to doing your squats in the gym.

Having strong legs is a sure sign of athletic prowess and also translates well into martial endeavours.

Epona is the Gallo-Roman goddess of horses and fertility. I associate the colour green with (among other nations) Gaul, and I associate horses with leg hypertrophy, hence the name.

You can wear these both inside the Temple of Iron and outside when the weather allows. The shorts are made of 100% cotton and is made in Poland (as is the rest of the garments listed below). 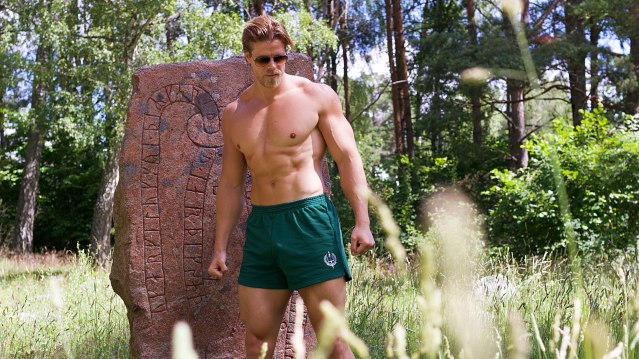 The Aesthetic Swimming Shorts are the most comfortable swimming shorts I have ever worn.

Speaking of swimming shorts, there is a cultural difference between European and American guys (geographically speaking) where the former prefer shorter swimming shorts whereas the latter prefer longer board-shorts. I am, of course, speaking in broad terms and it is my wish that all aesthetic and enlightened American guys try these out as well. Just be mindful that shipping continues to be delayed to the United States.

The Saturnus’ Imperial Tracksuit Bottoms are restocked. They deserve a special mention since they have served me well over the last year.

Saturnus (in Greek: Cronus) is a Roman deity associated with generation, dissolution, plenty, renewal and liberation, all aspects that can be wished for today. In Greek mythology he reigned during the Golden Age and we must post physique to end the Kali Yuga and bring back the Golden Age! I just mixed mythologies (Kali Yuga being a Hindu concept) but the mix works in this context because I believe we all can agree that our Modern World resembles the Kali Yuga to a large extent.

Imladris Athletic Tanktop
This is a tanktop that has been under progress for quite some time. I always like to try out new concepts and models before releasing them. I have trained in my prototype for about two months now and it has served me well.

The garment is very light and breathable and with a cut around the arms and shoulders that makes is optimally comfortable (it also minimises the sweat from the armpit to get to the garment). Perfect for training in warm climates.

Lastly, we have two new stringers. This time in organic cotton with a clean and stylish Legio Gloria – Evropa Invicta design.

They work well both in the gym and outside on a sunny day!

← Epic and Motivating Quote from Gates of Fire by Steven Pressfield