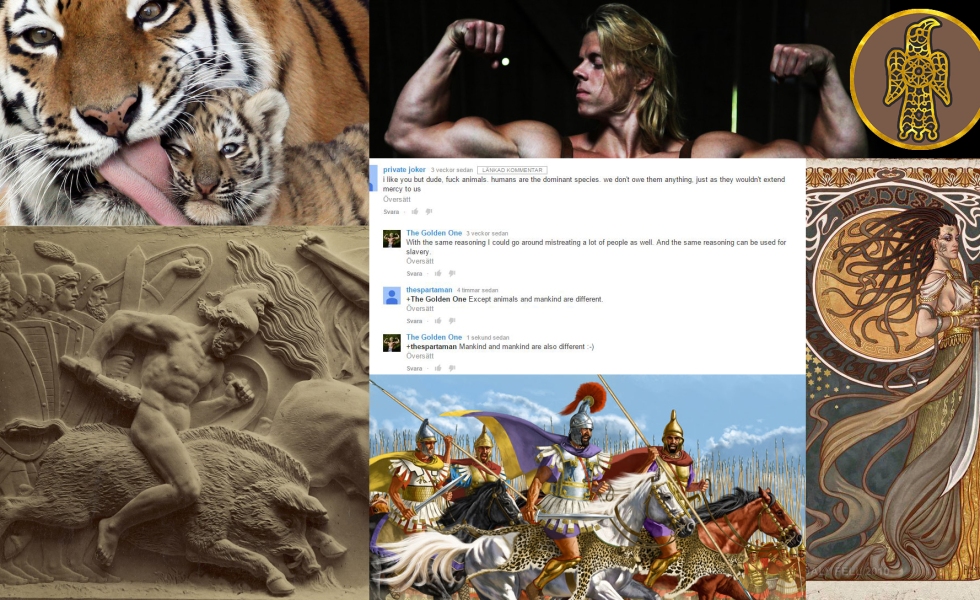 As a Proud Son of the North I have a natural respect for animals. Animals are my friends. After all, I owe my physique mainly to cows, due to all the dairy products I consume. What kind of person would I be to not care about those who supply that to me?
I still think we should eat some meat (in moderation), however, if you are the kind of person who don’t care one bit for the well being of the animals I cannot respect you, as such thoughts are degenerate and not suited to a civilized society or to a gentleman. If you justify animal cruelty with “they are going to die either way”, I have some news, you are also going to die one day.
With this said, make sure to honour the Allfather and Jupiter by voting for (in a capitalist market voting means buying) products from animals who have been treated kindly (ie if you are Swedish, buy Swedish products) and never buy Halal.
We also have the second argument that some mortals bring forth, and that is that mankind is one and all of it stands above nature. This is laughable and the part of the reason I don’t want to refer to myself as human or mortal. All humans aren’t the same, that is a Christian myth and well suited to desert mentality. And the argument that humans are superior used to justify animal cruelty, that is the exact same argument that can be used to justify slavery and slavery has no place in a glorious society.
Note that I am still all for consuming animal products, I am not saying that anyone should go vegan, just that you should choose the option where the animal has been treated the best.
And also, the notion of that strength grants you the right to treat others badly (no matter if it is humans or animals) is as beta as it gets and how inferior leaders are created. A true alpha looks out for the ones that are weaker, he does not see an opportunity to cause spiteful harm. Justified violence is glorious but spiteful harm done to the helpless is a sure sign of inferiority.
If a beta lefitst reads this he/she/it is bound to say “muh humans” “muh human rights”. Fuck your humans. Let us take Africa as an example, overpopulation is a severe problem, and as the population increases, animal life and their habitats decreases. Now the beta leftist ask; Why is it so important to keep the animals alive? It is rather simple, because if one link in the biological hierarchy is removed the rest of the system will be affected as well. And that could cause massive repercussions for the ecological system not only in the affected region but also world wide.
That is why it is more important to look out for the animals instead of humans.

Short list of what I do to ensure my favour in the Eyes of the Allfather.

– Only buy MSC market fish.
– Only buy Swedish eggs, milk, meat.
– Wake up each morning with thoughts of how I best can bring intellectual destruction to Cultural Marxism.