Regarding the He-Man and Barbie picture 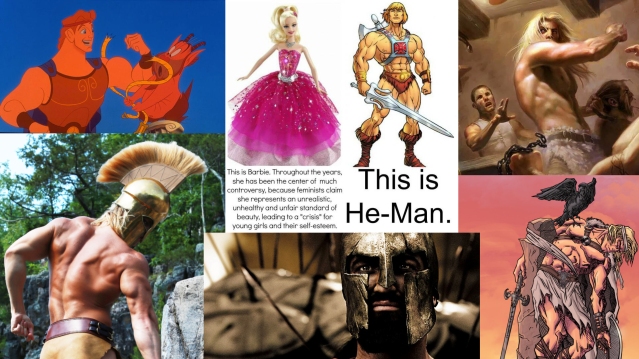 I don’t like the middle picture, not at all. Why? Because that is an attempt to victimize boys/men. I, for one, love the fact that He-Man is portrayed the way he is. Same thing with Hercules to the top left. I loved Hercules when I was younger. Massive biceps? Yes, massive biceps is good.
My point with posting this was to encourage you to not be one of those victim-anti-feminist-types. Complaining about impossible beauty/body standards is for fat feminists, leave it to them. I am not saying that there aren’t issues that men face (in Sweden for example girls get better grades on average than boys and men are more prone to suicide). Things like this can of course be discussed. What I absolutely despise though, is when regular ‘men’ want to be some sort of victims too. “Oh look how unfair the world is to me” *cries*. “Look I am also a victim” *cries* “Look how I was objectified because of my muscles” *cries beta tears*.
Men and women aren’t the same, so stop trying to use feminist arguments by just turning them around. Being objectified as a man is a compliment and should be viewed as such.
Wanting to be a victim is something shameful.
So if anyone is pointing at how unfair the world is for setting a certain standard (as He-Man), make sure to strive to reach it instead of complaining about it: Strive higher, do not wish that the standard is set lower.
Evolutionary speaking the standard you were set to was there to ensure the survival of the tribe, so to think that it is a modern phenomenon is false (this obviously also goes for the fat acceptance crowd).
Also, regarding the glorious Leonidas (Gerard Butler), I still remember all of the comments regarding his physique when the film came out, it was the same crying about impossible physiques etc. I am now happy (to say the least) that I did not listen to those voices of estrogen.
Lastly, what would you rather that your sons modelled themselves after; He-Man or My Esterogen Little Beta Pony?

To conclude. Wanting to be a victim is shameful and to get boys and men to strive higher is good.