The picture above is the current form, 3 weeks away from a photoshoot, 3 weeks is about enough time to get into a bit better shape. I will continue to ease into it without any sudden changes.
Below is a picture of the main component of today’s training session, the 440 kg Tire of Gains, which felt oddly heavy for some reason, I only did singles with it and then rounded the session off with some lateral pulldowns, so a bit of a  special session to end the week. 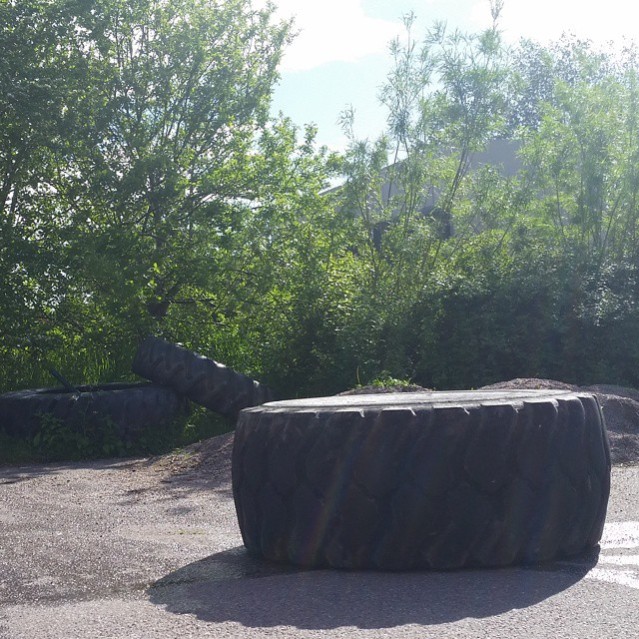 In other news regarding the training I had up until recently not squatted heavy, this was due to the minor injury that I had earlier this year (and late last year). When I got well there I focused more on deadlifts (as you might have seen from my videos from March/April), so the squats took the backseat.
After that I managed to hurt my right knee as well whilst doing paused squats a month ago. In a moment of clarity and despair I then noticed that my legs didn’t look all too powerful. And since I know that nature does not care about my excuses I came up a the simple solution to get around the problem: I acquired a pair of knee warmers (SBD), and to asses my strength I tried a single on 220 kg squat two days ago and it felt rather easy despite (or perhaps thanks to) my prolonged absence from heavy squatting. Either way I realised how much I have missed it. It is truly a special sensation to squat really heavy and to get stronger legs. So I decided to aim for 240 kg until the end of Summer, and then when I start bulking again I will aim for 250 kg which would be incredibly glorious to get. I will try to go forward slowly so that I do not hurt myself again.
Getting stronger in the bench whilst trying to retain a photoshoot ready shape is very hard and I will not attempt to get a clean 180 kg (with pause) until the Autumn when the bulk begins. With that said I will still ensure that I do not lose any strength (as that is a sign of lost muscles).

The picture above is from my latest gym video (https://www.youtube.com/watch?v=0xKkPVtbVoY). In the video I show what I basically do right after a Smolov Jr cycle or a max attempt: I do something else than the bench or train a bit lighter on the bench for a week or two to not overtax my shoulders (which can happen if you are training near your max for an extended period of time). 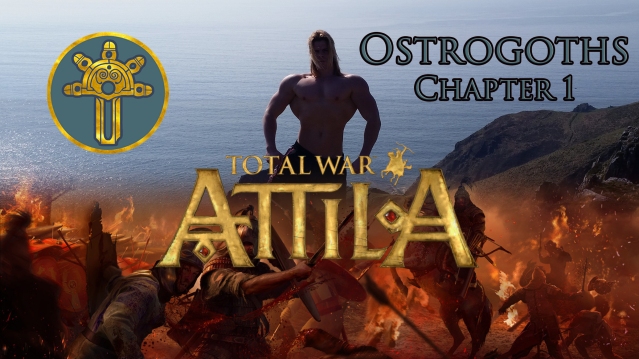 Lastly I started a campaign in Total War: Attila today and above is the thumbnail to the video. What I did in photoshop was that I changed the colour balance in favour of blue, which ties into the Ostrogothic faction colour of blue. To the text I also utilised the same tone of blue as the faction symbol to the left.

I will continue with my Baktrian campaign in Rome II and also make a good few episodes of this Ostrogothic campaign, gauging the popularity after 5 episodes and if it seems liked I will make 10 and if it does not seem liked I will start another campaign! And also yet again, these video do not in any way take away time from my other videos. I want to expand my YouTube as much as possible, if I can get more subscribers from my Total War videos all the better. The biggest channels with Total War as the primary focus have over 100 000 subscribers. And since I do enjoy the games so much as it is it would be stupid to not translate it to YouTube. Furthermore, if you are a true friend and supporter of what I do, you should also support these videos. The gaming audience is in general in great need of my teachings (yes that sounds narcissistic as hell but it is true), many of them do not translate the energy of the gaming into other endeavours, such as training hard in the gym or exploring nature or getting to know more about their nation’s unique history. So if I can via my gaming videos portray gaming in a context where the gym and self-improvement is an integral part much can be won (in that we are taking otherwise perhaps quite feminized men and turn them into confident masculine men).

With those words I wish you all a glorious and productive coming week!